Negotiations for a new contract with Piedmont are going well, with progress on many topics. However, bargaining around one of the most contentious issues, compensation, is coming up in the next round. That's why Piedmont agent Heather Hudson is heading to Washington, DC, on Monday to join Senator Bernie Sanders for a live streamed town hall meeting about the need to end poverty wages at American Airlines.

You’ll be able to watch the live stream on the Piedmont Agents Facebook page on Monday at 7pm eastern so don't forget to tune in to support Heather and share with your friends!

Learn about the progress made this week in bargaining and the live streaming event with Heather and Senator Sanders below.

The CWA and Piedmont bargaining teams met with a mediator in Kansas City in June. The mediator set expectations and provided some training. The mediator's role is to help both sides communicate and reach a tentative agreement that members can support. She emphasized that we would not be starting the bargaining process over from scratch, but would focus on issues that we want to address in the previous tentative agreement, based on member surveys and meetings.

Our CWA bargaining team met on July 9 in Charlotte, North Carolina, to finalize nine proposals: Article 6, Hours of Service; Article 8, Overtime; Article 9, Training; Article 12, Vacation; Article 13, Compensation; Article 14, Leaves of Absences; Article 15, Sick Leave; Article 18, Safety and Health; and Article 20, System Board of Adjustment. We then met with the company's team and the mediator on July 10-12. We spent considerable time in discussions with the company's team, explaining that our proposals reflect the demands of our members.

On July 11, we reached agreement on three proposals. On Article 9, Training, we agreed on language that requires the company to allot time for employees to complete required training during work hours. On Article 14, Leaves of Absence, language was added to identify acceptable proof of eligibility for bereavement leave. Article 20, System Board of Adjustment, allows for advocates to travel to system board of adjustment hearings. The company then presented a package deal on Article 6, Hours of Service; Article 12, Vacations; Article 15, Sick Leave; and Article 18, Safety and Health.

On Thursday, the company responded to our proposal on Article 8, Overtime, and added that to the package deal they had presented the day before. We were able to TA Article 6 with language that clarifies for part-time employees the percentage of their schedule they will be required to work, and it will we be consistent across the bargaining unit. We TA’d Article 8, Overtime, with improved language on mandatory overtime that we believe all agents will be very happy with. We TA’d Article 12, Vacations, with two changes: part-time employees with ten years of service will be able to split their vacation time up into three weeks; and for all employees we came up with some creative language that allows them to swap a day off for DAT Vacation. We also TA’d Article 15, Sick Leave, and added language to allow employees to shift trade and use hours from their sick bank. We withdrew our proposal on Article 18, Safety and Health.

None of the language from the original TA or the new TAs we’ve reached recently will go into effect until a complete TA is voted on and approved by the membership. Our next round of mediation is scheduled for August 8-10, in Washington, DC.

Mark your calendars for a big event on Monday! Piedmont agent Heather Hudson will take part in a town hall with Senator Bernie Sanders and workers from five other major US corporations on Monday, July 16, at 7pm eastern. The event will be live streamed online. Heather will tell her personal story as a way to spread the word about our fight for a living wage and our demand for fair union contracts at Piedmont and Envoy!

This is an amazing opportunity for thousands of supporters to learn about our struggle and to then urge American Airlines to end poverty wages at Envoy and Piedmont.

You can watch the live stream on the Piedmont Agents Facebook page on Mondayat 7pm eastern. Don't forget to tune in to support Heather and share with your friends!

Click here to check out the video about the event. Share the video to help spread the word. 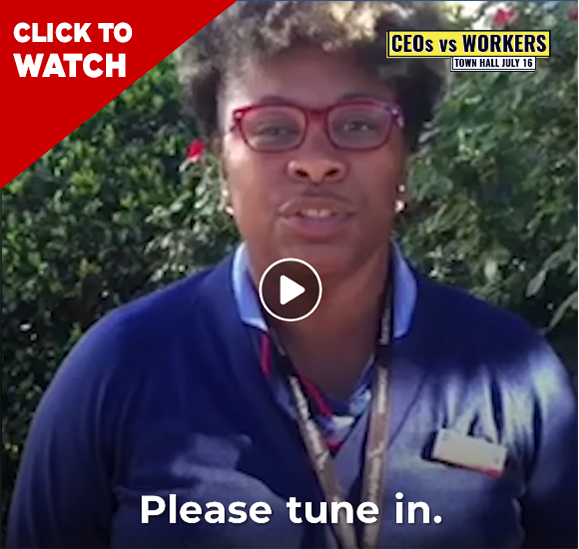 The United States is the richest country in the world, yet millions of workers live in poverty or can barely get by, including many passenger service agents at Piedmont and Envoy Air.

Senator Sanders has invited CEOs and workers from five major corporations--Amazon, Disney, McDonald's, Walmart, and American Airlines--to the town hall to have a conversation about corporate power in America and how to create an economy that works for everyone, not just the richest few.

Don’t forget to tune in to the town hall on Monday at 7pm eastern on the Piedmont Agents Facebook page!